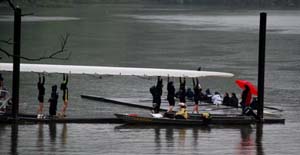 Steel City Rowing Club is a nonprofit organization that provides training and coaching in the sport of rowing to children and adults.

Steel City Rowing first began in the backyard of Dori and Ladislau “Laci” Tompa’s Verona, Pa., home near the Allegheny River. After competing at the Olympic trials, Dori received a request from a local school district to begin offering rowing lessons to students. College scholarships for rowing were at an all-time high and students enrolled in lower to moderate income schools were missing a valuable opportunity.

The organization began in 1997 and has trained 50 national champions, 10 of whom represented the U.S. in world competitions, and have helped students attain more than $1.5 million in college athletic scholarships. Dori serves as the organization’s executive director and her husband, Laci, as its head coach. The nonprofit is governed by a 10-member board of directors. SCRC has also organized a dedicated group of volunteers who are helping to develop the community and the riverfront, in partnership with government officials and other nonprofit organizations. The organization relies on membership fees and fundraising to operate.

As membership continued to grow, the Tompas needed a larger facility to accommodate the club’s equipment and events. SCRC was awarded a state grant for their new green building project, but needed a loan to begin construction before the money was distributed in full.

“This was a good loan for Bridgeway Capital because it fulfills our mission in helping nonprofits sustain their vital services to the community,” loan officer Dan Sullivan said.

The building was completed in 2010, and its geothermal heating system has dramatically reduced the club’s operating costs, freeing up the resources needed to purchase equipment and increase the number of student scholarships for rowing lessons.

“We work with anyone who can hold an oar or a paddle,” Dori said. “We’ve had 10 athletes that have gone to the World Championships in 10 different years. No other rowing club in the U.S. has that, and we’re very proud we can offer that.”